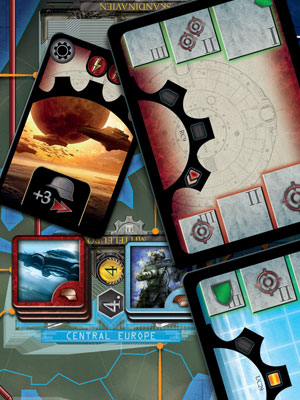 Iron Sky the Board Game is middleweight strategy game. Team of Reich players do their best to invade the surface of Earth. The defending team of United World Confederacy players organize defenses and brace for the impact.

The game has asymmetric mechanics: the Reich is straightforward invasion force with the goal to acquire a foothold on the surface, while the UWC balances with two resources, money and political power. The commanders also differ from each other. The Reich'ss General der Artillerie is expert in bombing while UWC's Politician gain political power with appropriate use of money.

Players try to do their best for the team. Every player is responsible for a single continent, in which his or her armies operate. Helping a second Commander is, however, necessary at times. The game lasts from 7 to 10 rounds. In the end, the score is calculated. The faction with most points wins the game. The score is affected by Territories controlled in the end, the casualties inflicted and the Commanders' own secret operations.

Course of the Game

Players pile up resources each according to the current situation in their continent. The more Territories you control, the more resources you accumulate. The Players use their Command Cards to perform actions on the board. All players on the same side play their Commands at once, after which the turn is passed on to the opposing team. Command Cards add and move Unit Tiles on the board. When an Army moves to an enemy Territory, a combat begins and it is immediately resolved with Combat Cards. Combats are over quickly and when the control over a Territory is changed, the resources for the next turn change as well.

Iron Sky the Board Game's unique mechanics eliminate almost all downtime. When your team is the active faction, you can negotiate and carry on your actions. When the opposing team is active, you will respond to the attacks on the board.

The game is easy to approach for beginners. More experienced players can introduce various Optional Rules to add more depth into the game.

After listening to our beta testers we decided to steer the game more suitable for experienced players. Iron Sky the Board Game prototype was tested and promoted in various gaming events in Finland and in Essen Spiel '11. The game turned out to be more aggressive and more controlled, as many of our testers wanted it to be.