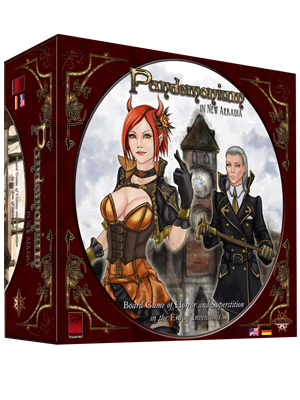 The world has lost its touch with the supernatural. It's time to remind the people a little. A convention of supernatural beings starts a race for the infamy. A portal between Nether and Terra is about to be opened. Will you be the governor when New Arkadia is conquered?

Pandemonium in New Arkadia combines supernatural and steampunk setting. Players take roles of supernatural beings conquering the city of New Arkadia. It is possible to affect other players, but mainly players concentrate on their own game. Goal is to build a cult around the character and use it to influence important locations in the city. Every fifth round is a scoring round and after fifteenth round the game ends.